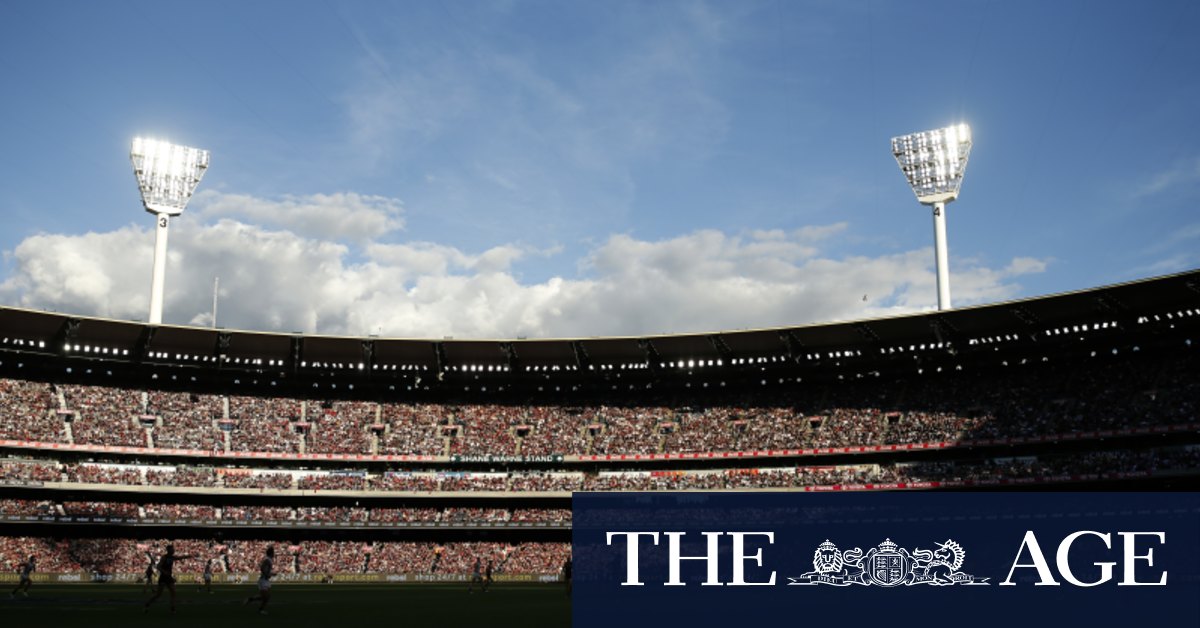 A man was taken to hospital with serious injuries after being assaulted in the toilets during the Essendon president’s function on Anzac Day.

Alright you lot, fess up. Who gave Gil a thumping at the President’s function?

A man was taken to hospital with serious injuries after being assaulted in the toilets during the Essendon president’s function on Anzac Day.

Police are investigating the serious assault which occurred during the last quarter of the blockbuster match. The man was left blooded in the toilet of the Olympic Room after the dinner attended by dignitaries including AFL chairman Richard Goyder and CEO Gill McLachlan.

Police confirmed a 54-year-old Kensington man was taken to hospital with injuries from an assault.

Sources said two men who were guests at the official function left the ground after the incident in the bathroom. It is unknown if one or both men were involved in the assault or what provoked the attack.

“Investigators have been told a man was assaulted in a toilet cubicle inside the stadium around 5.30pm. A 54-year-old Kensington man was taken to hospital with injuries,” the spokesman said.

“The exact circumstances surrounding the assault are unknown and the investigation is ongoing.”

An Ambulance Victoria spokesperson confirmed a man in his 50s was taken to St Vincent’s hospital in a stable condition with injuries to his upper body.

More than 600 people attended the Olympic Room event with tickets ranged in price from $700 to $1000 per seat.

It was the first Essendon president’s function since the infamous rabbit terrine reception in 2019 when about 30 patrons were struck down with food poisoning.

A patron at the function said they returned to the dining room from the outdoor seating after the final siren to find more than a dozen police and the bar closed.

“A few minutes later the paramedics wheeled this bloke out of the toilets. They had put a suit coat over his head I suppose to shield him from people looking at him because he looked pretty bloody and shaken,” said the guest at the dinner who preferred not to be identified.

“There was no getting away from the fact something serious had happened. They shut the bar and there were a lot of police and paramedics around. The police hung around for a long time interviewing people.”

There are many CCTV cameras in the stadium and as official guests at the function it is likely the two men who left would not be difficult to identify.

MCC boss Stuart Fox said he was unable to comment as there was a police investigation.

The AFL has been contacted for comment. Essendon said they were working with Victoria Police and helping with enquiries.

Clearly a rational discussion on selection policy. Kind of Bomberblitz style but in real.

Rabbit terrine reception is misleading - it was determined the accompanying relish caused the food poisoning, not the terrine.

So bloke who got beaten up objected to the offender(s) presumably bagging Essendon player(s) during the game.

We been missing a clapper in here since Monday?

gee that is poor form

We sit near this room and it was pretty quiet, with not a massive number of people at the function. Usually they are hanginh out the doors, but there is always lots of booze and lots of drunks.

At least someone in our colours showed some fight on Monday

Ah no it wasn’t. The caterers tried blaming the relish but it was tested and cleared (its a preserve FFS). I’ll bet a shiny new dollar a chef left the terrine out of the fridge or contaminated it during prep. Meat and dairy can easily carry that type of bacteria, preserves are boiled fruit and sugar thats safe to eat for years.

it was pretty boozy from where I sat.
Reckon a few on the gear as well. That’s an assumption, unless 2 blokes are in the cubicle with the seat down for others reasons.

Reckon I could put it down to about 2 or 3 tables.

Fair call - the conclusion of the health department investigation was that the relish was the most likely cause, not a definitive cause (based upon interviews).

Based on the AFL contract with Spotless. Again relish is preserved fruit with a 1-2 year best before date, terrine is mixed meat with a few days used by date. Its not hard to see where the real danger is. Attempted stitch up diverted.

unless 2 blokes are in the cubicle with the seat down for others reasons.

How did you know the seat was down?

This kind of action is never justified

Unless of course one of the officiating maggots made the mistake of walking into an EFC function, then I have no problem with it

How did you know the seat was down?

Based on the AFL contract with Spotless. Again relish is preserved fruit with a 1-2 year best before date, terrine is mixed meat with a few days used by date. Its not hard to see where the real danger is. Attempted stitch up diverted.

Yeah you don’t see jars of terrine out for sale in the midday sun all day at your local markets.

I’ve got relish in the fridge opened I’ve been smashing for over 4 years.

Sure - but given the speed of illness onset (an hour or two), the food poisoning was likely due to bacterial toxins and not the bacteria themselves. Toxins can survive cooking and preservation processes.