Round 1 versus Hawthorn at Marvel 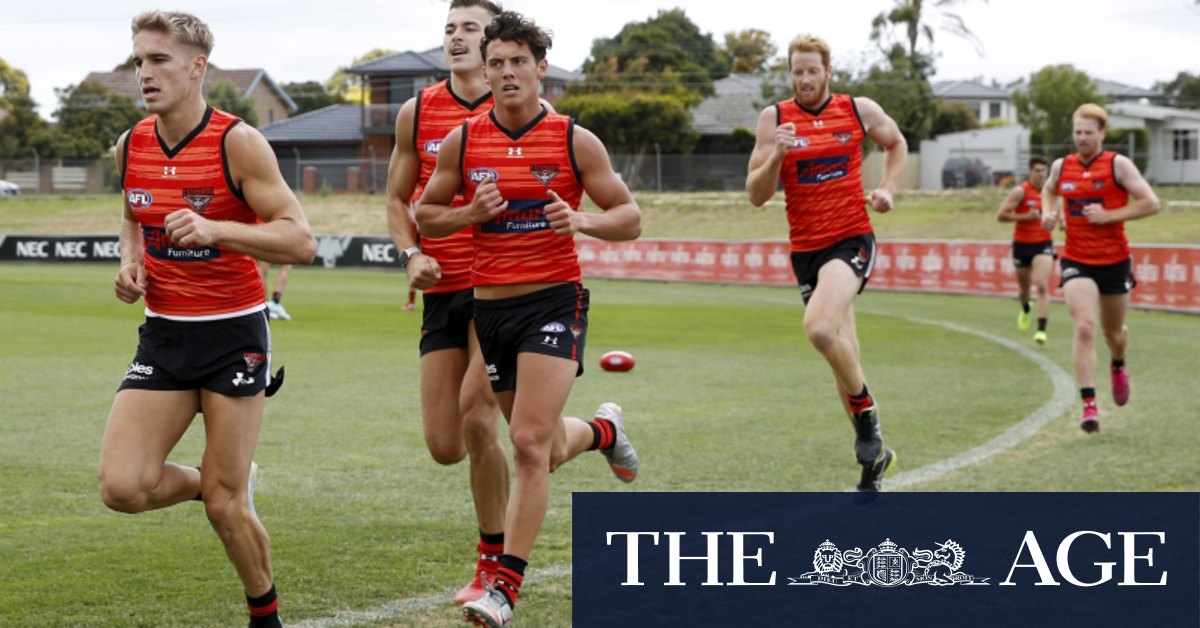 No change: Bombers clash with Hawthorn to remain at Marvel

The AFL have rejected Essendon’s request to move their round one fixture with Hawthorn from Marvel Stadium to the MCG, meaning less fans will be able to attend the match.

Bombers ask for clash against Hawks to be relocated

Essendon have asked the AFL to move their round one fixture with Hawthorn from Marvel Stadium to the MCG.

The Bombers confirmed to The Age that the request had been made in an effort to allow up to 25,000 more fans to attend their home game against the Hawks, after the league announced last week that the MCG and Marvel could operate at 50 per cent crowd capacity for the opening of the AFL season.

Hawthorn chief executive Justin Reeves was also open to moving the clash between the bitter rivals. “If it means more Hawthorn fans and members can get into the game, then we’d love to explore it,” he said.

The AFL chose not to comment on Essendon’s request, with multiple league sources saying the West Australian border remains the league’s biggest priority.

WA’s strict border stance on Victoria is on track to be eased ahead of the season, according to premier Mark McGowan, but that is still dependent on there being no further community transmission of COVID-19 in Melbourne.

Victoria is the only state still subject to any WA border restrictions.

McGowan said Victoria would reach his government’s target of 28 consecutive days without community spread on March 13 - five days before the scheduled AFL season-opener.

“After that point in time I’d expect that we’ll move to soften the border if Victoria doesn’t have community spread,” McGowan said.

Sources at the AFL indicated that the situation with the border is moving in the right direction, but waiting until so close to the start of the season to make a decision on the fixture may prove difficult.

The resolutions of Victoria’s border with WA may directly impact Essendon’s round one fixture with Hawthorn. While the Bombers would like their Saturday night clash moved, that may be problematic given the MCG is already hosting Melbourne and Fremantle in the 1:45pm slot on the same day.

Historically, games are not played at the same venue on the same day as the stadium would have to be cleaned (or in the COVID-19 world, deep cleaned).

If the WA border were to remain closed, Fremantle may not be able to play in Melbourne that day. Alternatively, the Dockers could be forced to stay in Melbourne longer than one week, in which case their round one match would go ahead as fixtured.

The Sunday of round one remains clear for the MCG. The only match in Melbourne on March 21 sees North Melbourne host Port Adelaide at Marvel Stadium.

Even so, the AFL is expected to be reluctant to grant Essendon their wish and move the game. Changing fixtures not only causes a domino effect with other games, but impacts on venue contracts. Marvel Stadium - now owned by the AFL - has an existing contract with Essendon whereby the Bombers play seven home games there and four at the MCG.

The club, however, would argue that in these strange times, the priority of the league should be to maximise fan attendance.

Fewer than 25,000 fans will be able to attend the round one clash if it remains at Marvel Stadium, compared with 50,000 if the match is moved to the MCG. The past three games between Essendon and Hawthorn at the MCG have attracted an average of 66,000 people.

Sources indicated that the Melbourne Cricket Club was open to hosting the game, if a move was approved by the AFL.

Good to see the club grow a pair.

Never been a better time to come good on that promise that games could be moved from Docklands to the MCG if Docklands was too small and it meant a substantially larger crowd could attend.

we would still play the Saturday night game

Well if Freo don’t hub outside WA then that game won’t go ahead.

we should win this game.

Every Hawthorn game should be at the ‘G.

Won’t happen. It will start a trend the AFL won’t want - other clubs will ask to do the same thing all year (as long as there are attendance restrictions).

Nobody else in the comp would actually be able to justify it though. It’s literally the only game on the fixture where it could be a thing. And it’s not like the AFL have ever given a ■■■■ about what precedents they do and don’t set.

but… that said I agree it probably wont happen. If it’s something for the fans, there’s no way it’ll happen.

Nobody else in the comp would actually be able to justify it though. It’s literally the only game on the fixture where it could be a thing.

I know what you mean - ours would be the biggest game. But it’s not the only game in which it could be justified. All two clubs would have to do is show that it’s likely they would get more than 26,000 of the game was played at the G (say 35,000 or 40,000) They wouldn’t have to show that they would get 50,000. There would be lots of games in that category.

It’s a joke, we all know what should happen.
Gils only has to snap his fingers, job done.

I know what you mean - ours would be the biggest game. But it’s not the only game in which it could be justified. All two clubs would have to do is show that it’s likely they would get more than 26,000 of the game was played at the G (say 35,000 or 40,000) They wouldn’t have to show that they would get 50,000. There would be lots of games in that category.

Let’s assume crowds increase against within the first month of the season, To say 75%? That would render moving any other game from Marvel basically redundant as no other game at Marvel is gonna attract more than ~40k, especially if it doesn’t involve us. This game however could literally double it’s attendance for Round 1 and then some if it was moved, so there’s nothing else in the same league.

That’s why it was a joke to have it @ Marvel in the 1st place.

Here’s a photo of Gil the slimey character… That’s definitely not Gil. In the end the Grinch gets it and learns the spirit of Christmas. Gil is just a crooked ■■■■ and will remain so till the day he dies.

I’m surprised nearly all aren’t fixtured for the g.

do you guys reckon we will win this game? it will be scary if we got smashed considering hawks are no good.