Talk about the year from hell. I know we have had falls from grace before but hard to remember one as sharp and as sustained as the current Crows team. Even with the list challenges and gaps, it still feels like they underperformed against their potential last year. They have enough talent on their list to have finished higher than they did.

Their backline is actually reasonable and injuries played their part last year. Talia is a quality full back and rarely beaten. Doedee has shown when he is up and about that he is a very capable intercept and marking player. McAsey looks a player and Brodie Smith is a good half back. They were swamped last year though with the midfield not able to stem the flow when the opposition got moving. They were often left with too much to do. Sholl looks a talent and should see some time off half back.

The midfield is thin on the ground and they need to throw some caution to the wind and give their younger players greater responsibility. I would expect that Fogarty sees more midfield time this year and that Pedlar will get games early. Sloane found it hard going last year missing half a dozen games and not looking like he could carry the load when he was on, will need a lot more support. Milera played some good minutes and I think Hamill will also see serious time in the middle. Hately looks a good pick up and will form part of the long term midfield future. It is going to be a very raw midfield next year but one they need to support in becoming more competitive.

The forward line that looked unstoppable a few years ago, looked a disaster last year. If Tex Walker was a race horse he would have been shipped off to the knackery, he looks entirely finished. Himmelberg looks a super talent and Tilthorpe will form some sort of sick twin towers at some stage. Tom Lynch looked ineffective for large parts of the season and Tyson Stengle who looks a talent seems unable to keep his nose clean off the field. McAdam looks a good prospect but there is still a lot of work to do for this forward line to regularly kick winning scores.

The jury is well and truly out on Nicks, he didn’t have a great first season but also he didn’t have a lot of tools or talent at his disposal. He needs improvement this year or the calls for his head will come but the end of the year, Adelaide don’t have a history of accepting mediocrity. The ruck stocks look solid enough. O’Brien is a good young ruck and worth building your midfield around. They have Himmelberg that can cover and picked up Tilthorpe who wont be ready yet but will give coverage.

I don’t think things are dire at Adelaide despite the wooden spoon, they have pretty good young talent coming through and should be able to leverage off their home ground advantage to climb up the ladder a little. I think they should be looking at 5-6 wins this year and will find themselves somewhere in the 14-16 range.

Have they kept Walker as captain?

They know where they are at, they have submitted to a rebuild program. I think they reached rock bottom last year, but then their finish to the season gave their fans hope that they have some decent talent coming through, and that Nicks is a decent young coach to guide them through. They’ll be in spoon contention, which is fine because they need to pick the eyes out of the early parts of the next 2-3 drafts and accrue top-end talent.

Geez thats tough to do.
WIth Brad Crouch gone there is a spot on the ball open for a youngster to grab. maybe on of the bulls Pedlar/Berry or If Cook comes on the wing maybe Hately goes into the middle.

One of Tom Lynch/Tex will be phased out this year in favour of playing Thilthorpe and Himmelberg.

They have a lot of spots filled but the ones that are missing are glaring.
KPB and mids.
Looking at the squad I’m not sure what the thinking behind getting Thilthorpe was.
And they probably should have let Sloane go.
This season should have been building on last year, and I don’t care what the results say, the back half of the season wasn’t terrible.
But there are more holes now and as much as I’d like to see it, I don’t think they’re going to win a lot of games.
They could have, but the way they’ve gone has ruled that out.
I guess that’s what a proper, proper rebuild looks like.
Keeping Lynch and Walker is still curious.
Three seasons away from finals, but building.
Not going nowhere.

Tall forward lines will do terrible, awful things to them this year. Will need a parental advisory.

McAsey is a key back I think.

If we can’t win more games than this mob we may as well shut down the football club.

People here are talking about the weakness of their defence, but l think their forward line is even weaker. Tex is a shadow of his former self, and without him dominating Lynch has been exposed. Fogarty is a bull, and a lot will depend on him, but he might be needed to plug some midfield holes. Agree about Sloane, he has a huge burden to carry, and needs help, a lot of it. Jibbs has retired, but won’t really be missed. The recruiting of Thilthorpe feels like a home town, feel good appeal to members. Plenty of pain ahead, bottom 4, for sure.

What a pr¡ck of a thing to do by Milera. Kelly within his rights to have dropped him here. 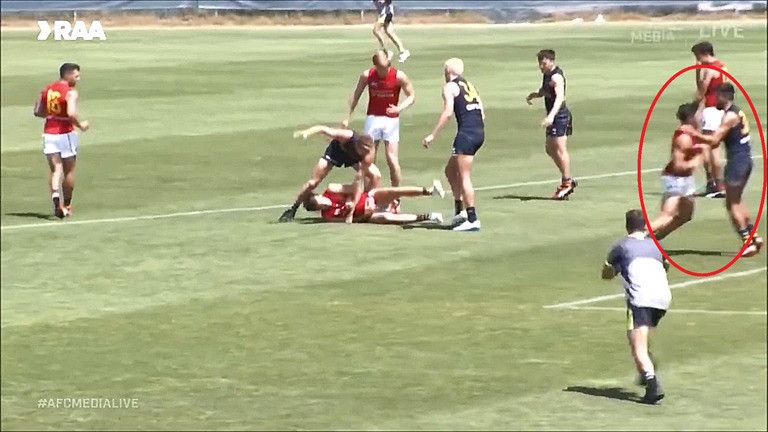 Dog act sparks scuffle in another Adelaide intra-club dust up

For the second year in a row, an Adelaide intra-club match has seen two players come to blows… this time, it was Jake Kelly and Wayne Milera.

What’s with the voiceover guy in that clip?

Gee what a rabble. Not a single A-grader on that list. Lucky they have North preventing them from winning a second straight spoon.

Yeah, they apparently made their decision a while ago but have been negotiating a settlement with him. Playing for the Eagles in the SANFL and will be paid by the Crows

as if they cant just sack him for disrepute.

McAsey has apparently told the club he wants out at seasons end and can’t get settled in Adelaide. There were some rumours that Connors had spoken to the Saints last year about a possible move for him as he had expressed his desire to leave. Looks like they will lose him for bigger all this year, pick 6 down the drain

Shame we couldn’t have swapped him for Fantasia.

Adelaide will demand Saints first pick, which will probably land between… 10-14, and they’ll get it in what is a strong draft year. Just get the best SA kid around that mark.