The North Melbourne Kangaroos community is reeling at the shock news that former player Red Og Murphy has passed away aged 21.

Murphy, who was on the Roos’ list in 2019 after being taken as a Category B rookie, passed away suddenly in Ireland this week, with local authorities yet to confirm the cause of death.

“On behalf of everyone at the club, I would like to pass on my deepest sympathies to the Murphy family at this difficult time,” North Melbourne chief executive Ben Amarfio said in a statement.

“Our thoughts are with those closest to Red Og, his family and friends in his home in Ireland, and all those who played and worked alongside him and became friends with him during his time at North Melbourne.” 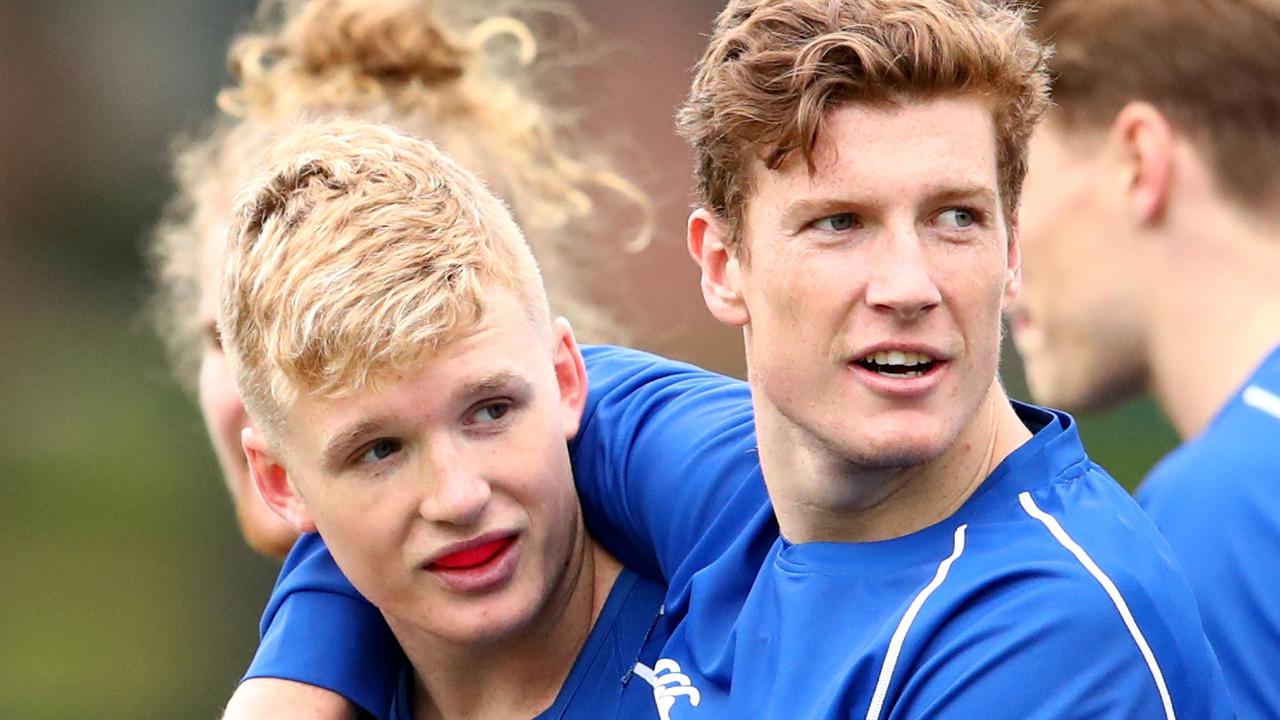 The North Melbourne Kangaroos community is reeling at the shock news that former player Red Og Murphy has passed away aged 21.

Noble has just apologised to the players because he gave them a spray and they were upset over it.

Apparently he got a bit personal and players were emotional about it.

They’re now pairing back their game plan because the feedback was it’s too difficult.

Ralph just said that on the couch.

Noble has just apologised to the players because he gave them a spray and they were upset over it.

Apparently he got a bit personal and players were emotional about it.

Imagine Walls with these blokes

When did Xavier move to Norf

If I was an opposition player coming up against North, I would be using this as maximum sledging ammunition.

It’s really poor that this situation not only happened but it’s been leaked publicly outside of the club inner sanctum.

Sounds like there is a few hurt feelings there. Won’t be too harsh though because it sounds like something we will experience sooner rather than later with some of our delicate petals.

It’s already happend to us. remember when X had to apologise to Hep and the group on twitter after a bad loss

In saying that must have been one hell of a spray!

So, North Melbourne players didn’t like it when David Noble unloaded on them.

Gut feel says harden buttercup, seeing as Noble’s team lost by 100-plus points to Brisbane in round 3.

Clearly there was much more venom in his words behind closed doors.

Maybe it was a smart move to apologise so early in his coaching career.

Maybe he did it to calm troubled waters.

Maybe he did it and then stored in the back of the mind which players didn’t like the strong feedback.

Stream every match of every round of the 2022 Toyota AFL Premiership Season Live & Ad-Break Free In-Play on Kayo. New to Kayo? Try 14-Days Free Now > David Noble has apparently dumbed down his game style after it was questioned by the players.

He has said to people that he will drive standards, and that if players can’t keep up, then he will leave them behind.

It used to be called tough love. Now, it might be considered workplace bullying. The world has changed.

The best teams are tough and uncompromising. 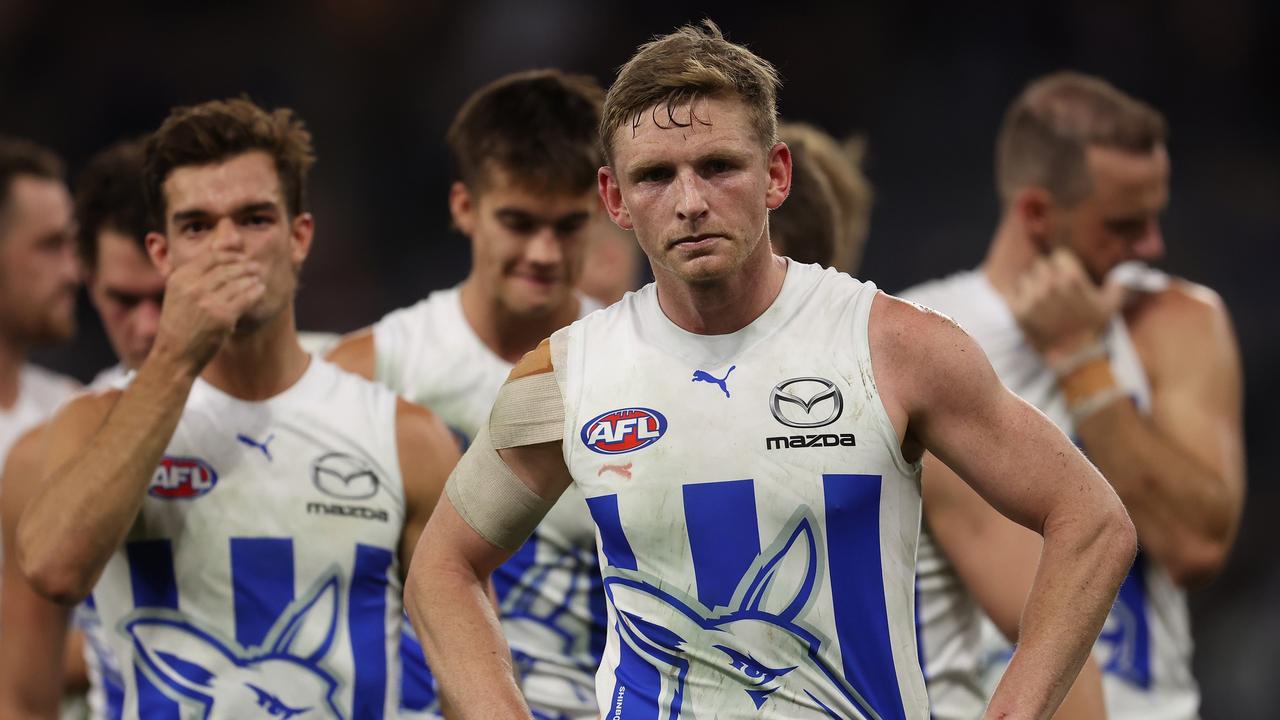 Jack Ziebell leads the Kangaroos from the field after being thrashed by Fremantle at Perth Stadium in round 8. North Melbourne sits 1-7 for the season.

At Melbourne, coach Simon Goodwin talks about the contest every week. Without fail.

His team started building towards it under Paul Roos five years ago and, in 2021, it came to fruition.

Put it this way, would North Melbourne players and seemingly some concerned football staff, force Roosy to apologise because of competitive feedback?

It helps when you’ve won a flag.

Noble, a long-time football coach and administrator, was appointed at the same time North Melbourne embarked on a deep clean-out. It was a major re-set after the departures of former coaches Brad Scott and Rhyce Shaw.

Noble straight away tried set standards, which he hopes will hold the players and club in better stead five years from now.

You know, kill a couple to teach a generation.

The nasty words, his tone and body language might not prove to be the biggest issues, although new-age thinking would have you believe kisses and hugs get a better result than finger-pointing and hard conversations.

No, the fear now is the players — and the results cannot be discounted here — have usurped the power of the coach.

Not because of the stinging sprays, but because they questioned his game plan.

Now, Noble has apparently dumbed down his game style.

Either North Melbourne chose the wrong coach or the players are not capable.

At round 8 into his second season, Noble has a mess in front of him.

They came out the following week and gave it to Sydney, being over run in the end.

Maybe he should spray them every week.

Not sure he’s quite that bad. But he’s definitely with a club that’s at ground zero. I’d assume he’s contracted until the end of 2023? If Clarkson and to a lesser extent Buckley weren’t sitting in the wings he’d be safe. But if you can entice 1 of those 2 then you probably have to part ways. Not sure what people expected from North this season. It’s a hard rebuild and they will go though some pain.

I can’t imagine Clarkson wanting that role. He’s heading to GC, GWS or a big club.

Me write football. Me write good.

Maybe they deserved it?

Could be good thing. Could be bad thing. All we know is North bad football. Me write good football.

I like this guy. He clearly knows his stuff.

I mean, North are bad football.

He’s not waiting for something that’s 4-5 years away?

Me write football. Me write good.

Maybe they deserved it?

Could be good thing. Could be bad thing. All we know is North bad football. Me write good football.

I would’ve given this a like if each line had one sentence only.

It’s another reminder for those who advocate for the coach to rip into the players that it’s not 1980 anymore. AFL is a workplace and younger players don’t expect to be verbally abused. Tough but respectful conversations, sure… being ripped a new one in front of your co-workers, not so much. Might work for some players, but will have the opposite effect on many.

If you ever want a career in communication specializing, you have only to apply.