Sammy & Dev back, BZT gets another crack, and Cutz named on the Wing!!

See the Bombers’ 26-man squad for Sunday’s clash with Hawthorn at UTAS Stadium. 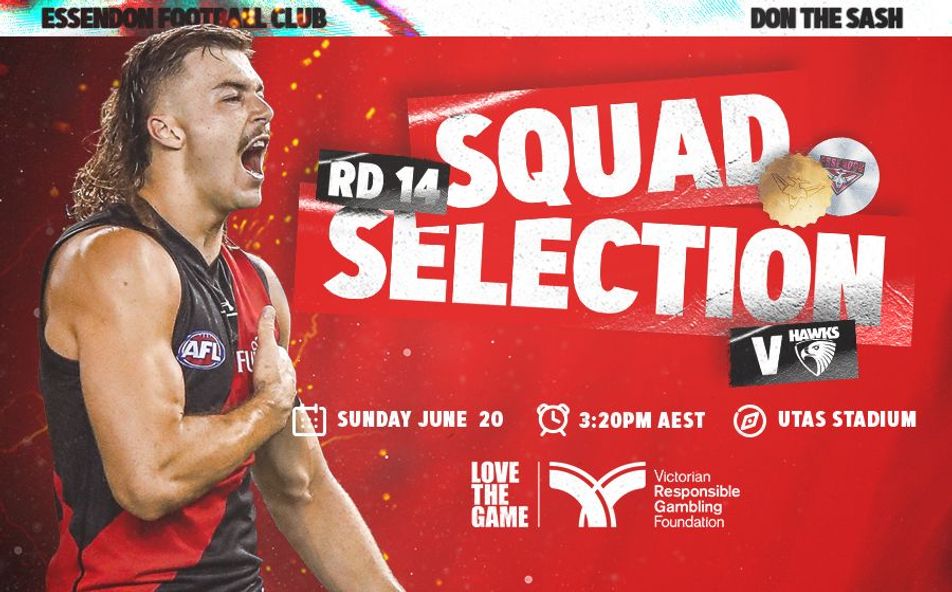 Essendon has named eight inclusions to a 26-man squad for Sunday’s clash with Hawthorn at UTAS Stadium.

The Bombers have lost Andrew McGrath (knee), David Zaharakis (hamstring) and Alec Waterman (calf) to injury, while Aaron Francis (managed) is taking time away from the club until next week with the club’s full support.

Patrick Ambrose , who came on as a medical substitute against Richmond, has been omitted.

Should he be named in Essendon’s final team on Friday, Durham will become the club’s seventh AFL debutant this season.

Selected in the mid-season draft just two weeks ago , the former Richmond VFL midfielder has hit the ground running in his new colours.

The return of Draper will also be a welcome sight for Bombers fans, with the emerging ruckman starting the season strongly before succumbing to a syndesmosis injury against Port Adelaide in round two.

The Bombers will name their 22-man team at 5pm AEST on Friday, with Sunday’s game to mark the club’s first in Tasmania for premiership points since round 17, 1992 .

Senior coach Ben Rutten takes us through the squad to face Hawthorn in Tasmania in round 14.

Im wrapped for zach reid to be honest.

Glandular fever can ■■■■ you for a year or two sometimes. Lucky they nipped it in the bud early.

I’m keen to see more of him! Iv heard some people say he could be haris Andrews 2.0.

You will see i removed the hamstring in brackets because I was not celebrating the injury.
I am celebrating him not being in the team full stop

Reading that team I think it will be either Wright (if deemed fit) or Phillips - and Cahill the sub. No way Draper plays his first game back with only a chop out from Cox.

All jokes aside on Cutler but we actually need him to play. The cupboard is bare of midfielders at the moment!

And it may just be for this game. Unless Cutler has a solid game.

Zaka is expected back next week. Snelling a possibility too. With Shiel soon after that.

Especially when the replacement is Cutler!

Hope he makes fools of the knockers, takes his chance and delivers multiple lace out bullets to our FWD’s.

So based on the starting 18, plus my own guesses, the changes are (guesses in italics):

This are the changes i’d make

I did too. Edited now.

Think your on the money.
not sure they would make Reid sub.
He may be a left field in, incase Wright not right to play.

or maybe Reid is already gone past zerk and zerk is the emergency.

Zerk is named on the field, so I don’t think he can be dropped from the team except for fitness reasons. I thought it was only the bench which could change.