Just read this piece about their famous clash at Windy Hill and how the stars never really aligned again after that for it to continue. 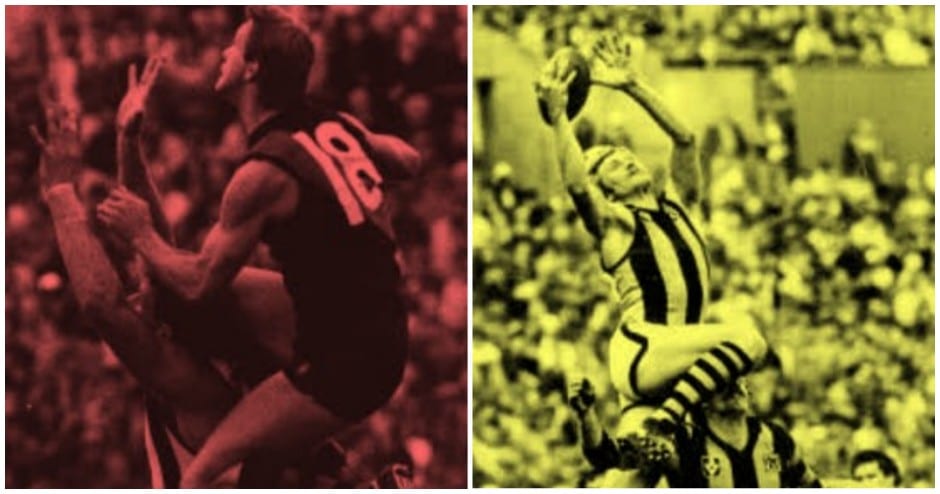 Speak to an old timer about the best duel in footy, and there'll be no hesitation. Peter Knights v Paul Vander Haar is etched in VFL history

Was anyone actually there? 16 contested marks between two players seems incredible.i would love to hear from anyone who witnessed it live.

I was there that day. Their aerial contest was a game within a game that day. Knights was older and more experienced than Vanda at the time. Both players went the mark all day. I thought Knights slightly bettered Vanda but gee it was exciting to see and playing defence always easier than being a forward.

Yep I was there. You don’t see one on ones like that anymore.

There were a few flankers used as stepladders that day.

I was there and have some recollection of the game, but it was 40 years ago and back then we used to carry an esky full of VB into the ground and drink ourselves stupid.

I was ‘probably’ there, but I think my memory is more due to the TV highlights package that they show from time to time. I was only 12 at the time and I used to go with my two older brothers, who used to carry an esky full of VB into the ground…

I was there, watching from the Cookson. The contest had been talked up during the week but I don’t think anyone realised how good it would actually be. They seemed to be constantly climbing all over one other. They would both leap at the ball and then it was as though the contest really started once they were in the air - each would try and lever himself up off the other guy’s body in mid flight. Neither was trying to spoil, both were looking to take the grab, so you have to give a lot of credit to Knights given that the traditional role of the CHB was to go the spoil. Van der Haar roamed a long way from the forward line so many of the duels seem to happen near the middle of the ground.

As I walked back to the car with my dad I remember feeling a little disappointed because it felt like Vander had been shadowed by Knights, and I suppose because we’d lost. I think I’d imagined Vander taking a dozen speccies and kicking a bag. But once I’d read the sports reports about the amazing contest that had taken place I realised how lucky I’d been to witness it.

I think I was there, but my memory gets a bit muddled with that game and the 1982 Wndy Hill clash alluded to in the article, where I definitely remember Vander pantsing Knights.
That and the four cans at a time limit, so 12 by three quarter time was normal, and the last quarter a tad blurry.

I was there as well,probably standing on 6 or 8 empty VB cans in the outer.
Was so much like 'watching a game within a game"
Remember it being real special as both players were very fair ball players.
No doubt the game i went from yelling Jezzza-Lenko to Van-Der -Haaaaar!!!
When attempting the speccy in kick 2 kick.
Knights got the honours and the win,but I’m betting the Dutchman kicked the better barrels that day.

I was there, … rarely missed a game in those days, … had the Flying Dutchman’s no 18 on the jumper and Duffel coat by then too.

Just to clarify, was anyone actually there that didn’t enter the ground with a slab of VB tins?

Is this thread sponsored by VB?

God-darn, judging by the amount of cans being tossed around - this game must have smelt horrible…

Well sometimes in the outer at Windy Hill there were so many VB cans on the ground that you were standing much taller. Six of us went to every Windy Hill game back then and had three slabs between us, we never went out much Saturday nights.

Some parents thought is was good as the kids played building blocks with the empty cans and left them to watch the footy, a bit like Lego. The only things around in greater numbers than VB cans were cigarette butts.

couldnt smell much else other than cigarettes and urine !

You could smell the doughnuts being fried on a good day.

Vanders had control for the first quarter and half and then Knights got into his stride and was well in control in the second half - We need to have perspective and remember that Knights was a gun at the time, a top 10 player, while Vanders was a second year player.

I was there standing in the inner in front of the Hird stand where we always stood. I had very little VB and do remember some of the game. It was also about long blonde hair which made both players instantly recognisable.
And awesome Ariel skills and the fact that players played one on one. Great day great contest.