This is Party Time with Gary Moorcroft

Had to flick on ABC, … Brad Johnson is just sooo annoying. 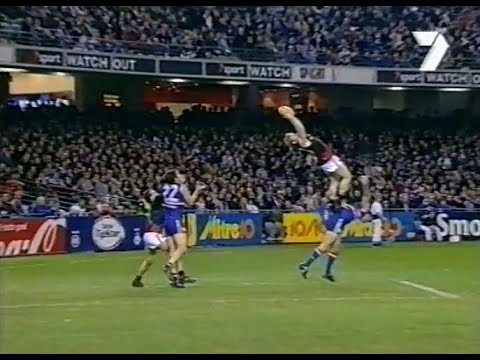 (Dermie’s brain is slower than his voice, but he earned the title.)

When he took THE mark, I jumped up and the radio in my pocket ended up two rows in front of me. Luckily neither it nor what it hit broke.

THE mark was simply the climax of an amazing half of footy.

How’s the wheels on Spike McVeigh!

His half of footy was extraordinary enough, without the mark.

6 goals from a ‘small’ forward, and not a crumb or snap to be seen.

Geez, we don’t get nights at the footy like that anymore. Cheers for posting that, Dave.

We were such a pack of pests back then

After watching that clip, Bruce has got me convinced.

I don’t believe it happened.

Damn, it never gets tired and nothing makes me beam more. I love the crowd roar when they’re watching the grab on the replay.

With all the doom and gloom around that really put a big smile on my face, great night at the footy, I remember it clearly, cheers.

Back when Essendon was a ruthless team and not a laughing stock like it is now what’s happened to this club? team was full of tough nuts and skill

That was an awesome video to watch DJR. Cheers mate!

What a half of footy. I’d forgotten about how well he’d done leading up to that mark.

Imagine having 5 different opponents in a half

Didn’t he break his hip on the landing? He should’ve sued Telstra or Colonial or whatever stadium it was at the time

That mark basically ended his career

Moorcrafts mark should be rated number 1 over Shawn Smith

Iirc it was still giving him grief even when he was running around at Silvan 05-08 (or whatever years it was).
From all reports though he still managed a few grabs that rivalled, if not surpassed, this one

He had a decent output versus Collingwood in round 20 of 2002. After he kicks his fourth and fifth in the closing minutes (both differently awesome) and giving it to the Pies cheer squad, you see him saying “one more, one more”… stupid timekeeper had no sense of romance, though.

Somewhat Big Sammy Hunt debuted that night; his first touch was a leading mark which he then converted into a goal.

That was a brilliant half of individual footy to watch. I will never forget that mark. I was sitting in the pocket on the other end of the ground but was still incredible to see. I was also leaping out of my seat.

I love moorcroft. Probably in my Favourite top 10 players of all time

Back when Essendon was a ruthless team and not a laughing stock like it is now what’s happened to this club?

This is not a question, it isn’t asking anything.
We can always trust you to bring the mood down.

Bruce nailed the call too

You realise that half of footy has meant we have spent a lot of the last 20 years kicking to small key forwards. Without Moocroft’s amazing night we would have little reason to think midgets can play key forward roles.