Training this morning on an overcast morning.

All were sighted on the track except McBride and Heppell. Gown came out later to retrieve balls from behind the goal, could well have been doing rehab work. Daniher and Draper were on the rehab oval and were later joined by Hooker.

Today was mainly skills, with a smattering of match-sim. The boys actually looked quite sharp this morning, skills looked very good. Movement of the ball looks far more productive and organised. I guess you could call it ‘purposeful’. Laverde again looked dangerous up forward and attacked the ball well, ideally he clunks a few more of the pack marks he attempts. Liked the role of Townsend at a hit up target on the wing, a couple of really strong contested marks.

Handballing drill with defenders in confined spaces. This drill was done really well, blend of good quick hands and good pressure. Townsend was really good with a couple of clever taps and underground handpasses

Good to see young Hird (in the #49) on the track today. A couple of really nice handpasses in traffic, and looks like he has reasonable pace. Only did probably half an hour of skills, and then some running on the second oval. Obviously, he’ll need some good gym sessions, but he looked reasonably comfortable out there. Still a bit worried about him in a contact game.

Stewart involved in pretty much all of today’s session, and looked quite good. Some really clever forward craft up the other end, and looked to be moving well. Stayed on after training to do some extra running - at a reasonable pace. Looks likely to be ready soon, will hopefully come through the VFL in the next couple of weeks.

Hooker did some of the skills session, but came off to have some work on his back, then went onto the second oval. Not sure what to make of this.

Daniher was still doing straight line running, seemed to cover a fair bit of ground. He told me his recovery is ‘going well’. He had a kickabout with Draper and Hooker on the second oval, but my attention was on the main oval. Draper still appears to be progressing well, was doing some set shots from 15m out in front (one near missed his foot).

They were trialling another young ruckman today (not Teakle, so I’d say that means he won’t be the last list spot). He didn’t show anything that would cry out at recruiters/coaches. I’m spitballing here, but I don’t think the club are sold yet on Lockyer. Today’s session wasn’t great for Lockyer. Was misjudging the flight of the ball a fair bit in the air when doing specky practice.

Walla kicked a couple of beautiful goals from the pocket with drop-punts. He then kicked a ball which accidentally hit a young girl in the face (a glancing blow, she’s fine). McQuillan inspected and diagnosed ‘tough as old balls’. Walla then came over for an autograph and photos. Gent.

I’m more optimistic about us than I was a few weeks ago. Things are looking an awful lot better, not only in this pre-season, but even last year. I’m no expert, and I’m not sold yet, but I like what I see.

Training this morning in cool conditions with a mild breeze from the south. Starting times are all over the place this year. I got ther about 8.45 as they have been starting eralier on Saturday’s but they didn’t come out until just after 10 and finished just before 12. I was also told earlier in the week that today would be the main session with Thursday just light skills but it seems Thursday was a more active session. It wouldn’t hurt if the club could put out better communication about this. Just my little rant for the day.

Heppell didn’t train today but was at the club in gear so probably did work inside.

Gown also didn’t train but was out on the second oval and looks like he still has a slight limp.

McBride was also absent I have no idea why.

Lockyer trained along with a new blond ruckman, we don’t know he is yet but we think he’s also trying for the last list spot. Tom Hird also trained

The best thing about today was the modified group or lack thereof. For the most part it was only Joe, Draper and Johnson. Hooker started with the main group but after about half an hour went to a physio on the sidelines and had a stretch and short massage before spending the rest of the session on the sidelines. He looked to be moving freely so it was probably part of his plan for today.

Joe today was doing mainly volume work from what I saw, nothing much to report.

The new ruckman was OK, didn’t do anything too special. He has more size on him than Teakle so would be more AFL ready, but I thought Teakle’s skills looked a bit better.

It was interesting seeing Tom Hird one year on. He looks to have grown a bit since I last saw him, and while still light has some development in his upper body. His ball handling was very sound and I was surprised on a couple of occasions at how quick he was. I didn’t really see him kick the ball much at all, but I think there is definitely something to work with, particularly now he is a little bigger.

Hird and the new ruckman completed most of the session before going to the second oval for endurance work.

It was very pleasing to see Stewart out there for the full session, he looked good on the times I saw him. He and Bellchambers stayed out after the rest of the group had finished to do extra running.

They did one of the keeping off handball drills in a confined area today which used to be a very common drill in previous years but I have hardly seen it used this year, maybe they have been doing it indoors. This was also by far the best I have seen them execute it, their hands were very slick, adn on several occasions they did underground handballs and knock ons expertly to avoid a tackler which was very impressive.

Overall the whole session was very upbeat, (with the exception of Coner berating Fanta in the handball drill for a missed pass) the mood seemed very buoyant, I think they as well as the supporters gained a lot of confidence from the game last week.

One little last word on Lockler. While the players were having goalkicking practice he had a ball kicked to him way over his head, he leapt up and took it perfectly cleaning in one hand. It’s hard to explain how difficult this was but how naturally he made it look.

Today’s session wasn’t great for Lockyer. Was misjudging the flight of the ball a fair bit in the air when doing specky practice.

I wasn’t that worried by him missing a few. For those not there they were kicking the ball above the head of a trainer with a bag on his back for the players to practice getting a ride. The biggest problem I thought was the ball was kicked too long for him a few times.

I’m sure he hasn’t but the thought did cross my mind!

This was also by far the best I have seen them execute it, their hands were very slick, adn on several occasions they did underground handballs and knock ons expertly to avoid a tackler which was very impressive.

Was nice to see you both today.

Interesting that we’re trialling another ruckman. Last year must have really left some scars.

Interesting that we’re trialling another ruckman

Interesting that we’re trialling another ruckman

He was training with the club last pre-season.

Do we think the club told him to go away, and touch up on his skills for 12 months? Obviously he has people around him, who can put him through a quality footy program.

Tom Hird would have had a footy glued to his hands for the best part of 12 years - a significant amount of the touch, feel and skills that good footballers have is bedded down in that early development - I am super confident his ‘footy skills’ won’t be an issue - probably likely to be a strength. It will be the process of catching up on the physical demands of the game that I think will be the biggest challenge for him.

Training reports always make me feel good in the footy starved off season.
But footy reports that include commentary on a young Hird, pushes my happiness to sonic levels.
I just hope Hirdy J has fun. Anything else that comes from his time at his dad’s club will be a nice bonus.

So, there was a Mystery big Ruck dude there today, & no one has a clue who he is eh?

Fkn more moves afoot than a tin of worms at EFC this year!

Anyone know who this young ruck next to Hird is? Trialling today with Dons. Maybe draft guru @MattBalmer7 knows? https://t.co/43Byfohodg 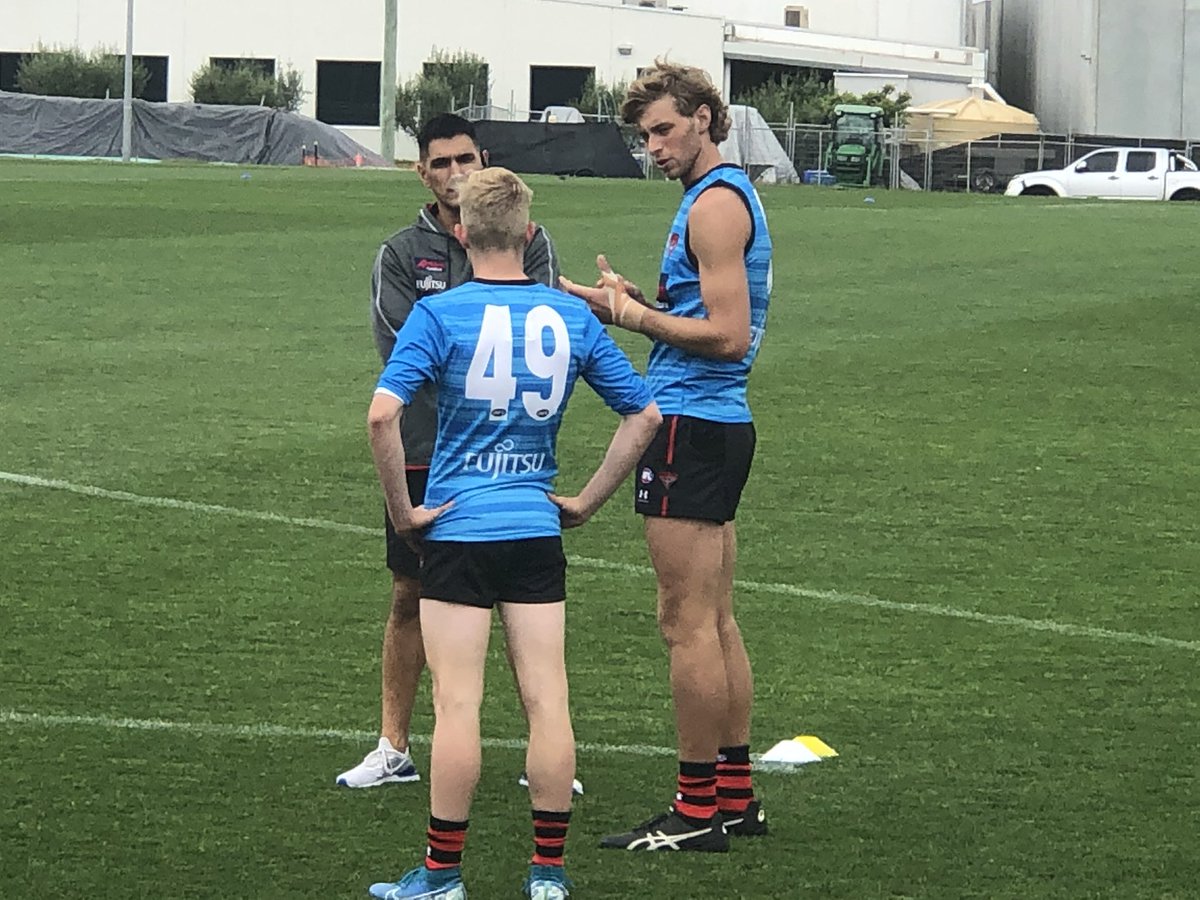 Thanks for reports lads.

Has Tom done the full presaeason or just started

I’m not talking about Bellchambers - think I know the answer there.