Met up with @aboods today after he used his journalist contact to find out where and when we were training. I am sure I saw Darcy and Marty go into the main Metricon stadium, so of course I followed them in. Was abruptly evicted by security; and in hindsight I was probably being a bit reckless. In my defence, I was socially isolating by about 100 metres as the stadium was deserted.

Luckily we were training on the outside ground nearest Royal Pines.

Before the report, just need to honour those intrepid training reporters who have come (and gone) before us. Some may remember that @Alan_Noonan_10 used to provide “”reports””, so I’ll pay homage by channelling my inner noondog

Hey this report will be brief. I’m not writing up drills or stuff like that and don’t ask me questions. Don’t ask me about Rama either.

But seriously he has a keen eye for talent and we appreciated his insights.

The rehab group included Hooker, Fanta, Stringer, Hepp, McBride and Johno. Mcbride didn’t look injured. In the previous training I attended McQuillan was in the rehab group but played soon after and I think it’s just lighter training for McBride. Ambrose and Hird were on bikes.

Also there was a modified group. Hurley didn’t train except for a session with the backs late in the session and he was mostly standing around in that. He ran laps with Cahill and looked fine. I would say he’s not injured at all and he rested from training as he expects to play the next 3 games. Admittedly the other key players who will need to play the next 3 did train.

Cahill didn’t train. Ran laps with Hurls. Lav in a moonboot. Hepp was running a lot and quite quickly. He’s looking very good. The other injuries – Hooker (who told us he’d be back in 2 weeks), Stringer, & Fanta did a lot less work than Hepp, but of course their injuries are different type or stage.

Coaching. Forget about job titles. Rutten runs training and today Caracella did most of the teaching of players, and most of it was about ball movement. Dan took the forwards when they separated into backs, forwards and mids and I assume Kelly worked with the backs. Worsfold doesn’t get involved in training other than watch on, collect footies etc. Clearly he is a mentor for Rutten and others when needed.

There was a midfield drill with Draper, Langford, Snelling, Parish, McGrath, Shiel, Merrett, Smith & Zaka.
At one stage we saw cutler and ham training with some of the mids who would play 2s, but don’t read anything into this as players train everywhere. Mutch trained well and you’d expect him, guelfs and/or clark to get a game sometime soon with the short turnarounds.

The backs were Zerk, Saad, Ridley, Francis, Gleeson, Redman and Hurls was with them too.

Conor was great. He was loving training forward and snapping goals – he didn’t snag too many – but when he did he was in full voice. He’s fine this week and should be picked to play forward. His broken finger is not taped to the next finger now and his ball handling is back to normal.

Joe did full training and moved really well. With no more setbacks we’ll see him playing in 2-3 weeks. That might be half a scratch match to see how he pulls up, I wouldn’t know, but he’s looking good and the plan is obviously to get him right to play soon.

Given the expected ins and forecast for rain on Friday, you would expect Bellchambers to be replaced by McKernan, Mckenna to replace Cahill, and Langford probably for one of the wingers. Not sure if we’re too tall down back if it’s wet?

The full group got together and there was a cheer. We don’t know who or what for. Mozz trained well but we couldn’t see if they were cheering a debut, or just that the tea lady had finally nailed the pumpkin scone recipe made famous up here by FloJo Bjelke-Peterson

Great write-up @stir_fried_ewok and very good to meet you today!

The full group got together and there was a cheer. We don’t know who or what for. Mozz trained wel

The cheer leaves us in a bit of suspense.
could have been interesting, agree with your ins - Langford, McKenna and Mckernan

will be up and about if its for Mozzie.

we should find out soon enough, could have been for McKenna as a forward.

sounds like the mood around the place is still a bit buoyant, even after last weeks loss.

Did joe look to be jumping and leaping at 100%?

I just hope he hasn’t lost his aerial ability

Mozz wasn’t training like he’d just been selected to debut. Joe did everything every other player did. He wasn’t taking hangers or being overly physical but training is mostly non-contact and about hitting targets. There were drills with tackling. I didn’t see him get tackled but I didn’t notice him standing out of these drills. I think he just did normal full training, the same he was doing 3 weeks ago at Southport. All it means is he is injury free and he needs to stay that way for a few weeks before he’ll get game time.

Re the cheer, I thought it was a lot less boisterous than the Cahill one a few weeks ago. We were wondering at one point if it might just be for someone like Jones being back into full training or ready to play a scratch match

That or JD back into full training

Good work @stir_fried_ewok, informative and uplifting with a few points.

Extra bonus points for you in trying to sneak into the ground!

Great work. Appreciate the effort. Thanks.

Cheers! If we go with McKenna, McKernan and Langford, that’ll be a huge increase on our stocks last week.

Thanks so much stir_fried_ewok for your much appreciated report.

Thanks for the report! I don’t think they normally announce debutants until the Thursday, so I’m guessing the cheer may have been for Jones who’s back in full training and will play in a scratch match this weekend.

Thanks for the report

Nor sure i like McKenna going forward, we suddenly are low on short running backs

Re the cheer, I thought it was a lot less boisterous than the Cahill one a few weeks ago. We were wondering at one point if it might just be for someone like Jones being back into full training or ready to play a scratch match

Maybe it was for Zaka getting dropped? 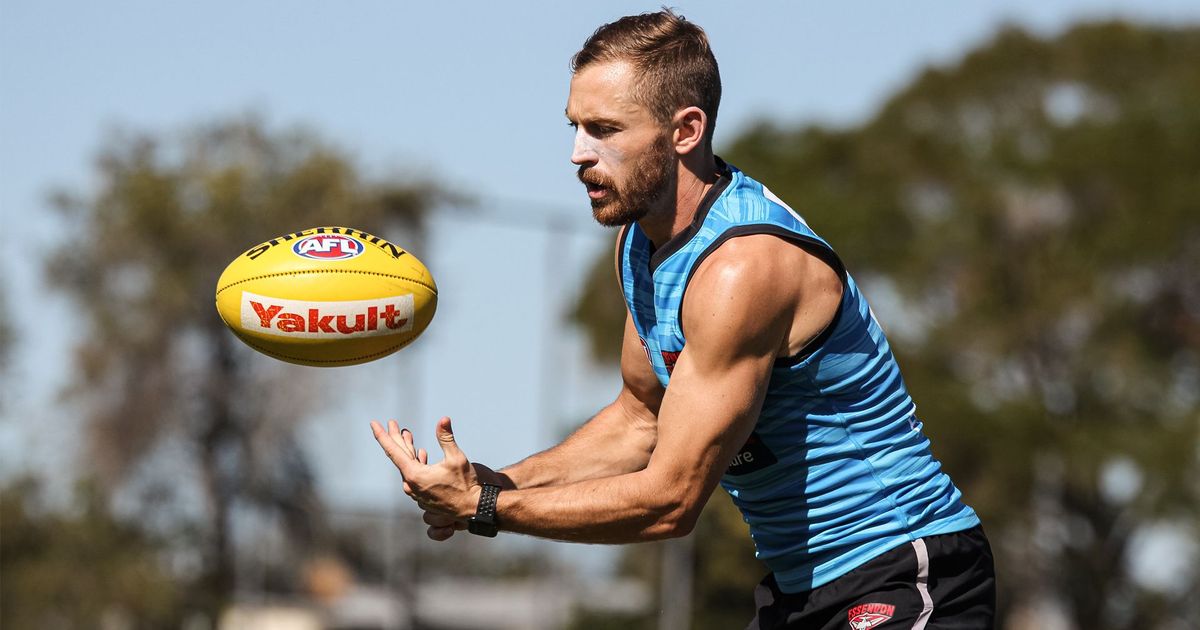 Go inside Wednesday's session at Metricon Stadium as the Bombers prepare to face the Giants.

If Mozzie was getting a game, his family would have heard the cheer from Halls Creek

Posted in Joe thread he is a sneaky chance to be back this week. Definitely got a cheer from the boys.