Our first ever number one pick

What do we think?

Im just waiting for blitz to meltdown when he fluffs a kick at training.

The good thing is, he wont be under nearly as much scrutiny in his first year as the majority of the eyes will be on Job and th others returning

Kid should get a bit less hype than usual from the media which is good for him.

I know it’s not a reason to have picked him, but now that it’s done, I kind of do like that our prize recruit should be ready to go round one. In a position we really need someone.

It’s kind of like being able to plug the new Nintendo into the telly on Christmas Day. Instant gratification!

Player type screaming, “pick me!” What a talent with immense drive. He will fit in with the boys beautifully and he’s raring to go round 1 2017. Assuming Essendons prospects don’t head south for any unexplained reason (hopefully the clubs old “friend” injury doesn’t come a knocking anytime soon) there is some genuinely exciting times ahead. Absolutely rapt McGrath is in the red and black!

Snapshot:
Andrew McGrath started the season as a relatively unknown player, not selected for Vic Metro U18 as a bottom ager along with not making the AFL Academy after winning the Vic Metro Under 16 MVP. McGrath is an exciting prospect that looked at his best showing his dash across the half back flank throughout the Under 18 championships, where he won All Australian honours and won the Vic Metro U18 MVP.

McGrath however isn’t just a flashy type across half back, he can work through the midfield and win his own ball. His match against Gippsland Power in the TAC Cup where he collected 44 disposals, 19 tackles and 14 clearances earlier in the season shows he has the toughness to play on the inside. At school level, he’s played in a multitude of rooms even pushing forward and hitting the scoreboard in the latter half of the season for Brighton Grammar. His two goals in the wet against Haileybury in a low scoring game were vital to the Brighton’s success.

What makes McGrath even more accomplished is his leadership skills. McGrath was co-captain of the Vic Metro side as well as being school captain at Brighton Grammar School. With clubs looking for allround footballers, there is no doubt McGrath will appeal to clubs throughout the interview process. With Essendon holding pick one, McGrath along with Hugh McCluggage are the two players believed to be in the mix for their first selection.

His performance in Vic Metro’s opening game of the carnival saw him shut down the dangerous Ben Ainsworth, keeping him to two handballs – after he had booted four goals in the third term. A moment of brilliance saw McGrath play on from full back and run & carry the ball forward, setting up Dylan Clarke to mark and goal from the goalsquare. McGrath played a similar role on taller Eastern Ranges young gun Jaidyn Stephenson also keeping him goalless after moving onto him in the third quarter.

There is a lot to like about McGrath and his athletic background, stemming from him being an Australian junior hurdler means he can create an electric highlights package. McGrath has had a big year and tested well at the combine, as one of the players who have played the most games in 2016. McGrath too is likely to compete in the APS school athletics final, where his athletic display will be on show for those clubs who will be sitting in the stands.

If you have not seen the video of McGrath’s superb run out of defence in the Vic Metro’s opening Under 18 championships game it is a must watch (in the tweet below). McGrath changes direction at the touch of a button, with strong agility and being quick footed means he moves quickly. McGrath is no11t a renowned straight line runner, as indicated by his over 3 second 20m sprint time at the National Combine.

McGrath did have knocks in the TAC Cup at times for not winning enough ball, but a real strength of his was his ball winning ability. McGrath averaged 32 disposals and had four games where he had 36 or more disposals – including his huge 38 disposals in the TAC Cup Grand Final (28 of which were in the 2nd half) seeing him win Best on Ground honours.

McGrath’s movement to a more of an inside role after returning to the Sandringham Dragons full time after school football season, saw him win more of the ball and resulted in a great clearance result. McGrath’s clearance numbers were outstanding and he had the fourth most clearances out of any of the TAC Cup players invited to the combine.

McGrath was able to match offence with defence at plenty of times throughout the year. He had to match up on Ben Ainsworth and Jaidyn Stephenson on the last line of defence, but still had to rebound the football forward for his team – as both were trailing at the two points of the year when he was the crucial defender.

There is no question McGrath can play any position on the ground. He has played on the last line of defence for Vic Metro (on Ainsworth) and Sandringham Dragons (on Stephenson). He’s had dashing moments across half back and on the wing, as well as winning his own football in the centre of the ground. McGrath was pivotal up forward for Brighton Grammar at times, including his crucial two goals in the wet (including a snap from the pocket) that ensured they would get over a strong Haileybury team.

McGrath does a few knocks with his kicking. McGrath doesn’t have a long boot and does struggle to kick the ball 50 metres. This often seems his look for a shorter target rather than going long down the line. What McGrath at stages does, is he runs 10m and kicks the ball 40m taking the ball 50m (the same distance as kicking the ball 50m).

Whilst his kicking can be hot and cold, he can attempt to pull off a game opening kick rather than playing the safe option. His kicking efficiency at times were down in the Under 18 championships, with him using his non-preferred left boot at stages.

At times in stoppages in McGrath’s defensive 50 his defensive positioning can be incorrect. In a few instances at stoppages in the National Under 18 Championships, McGrath wasn’t in the correct positioning and it allowed his opponent to get goalside and in one case resulted in a goal. McGrath is still learning his craft deep in defence and it did seem to improve throughout the champs with more exposure.

In the latter half of the season at TAC Cup level, McGrath mostly played further up the ground rather than being deep in defence at times in the champs are he was better manning his opponent.

Summary:
Andy McGrath has come on in leaps and bounds this year and if 2016 is anything to go by, McGrath could well run out with his new teammates in Round One 2017.

A superb leader and speaker, McGrath is well liked and a figure that some clubs have referred to him as ‘the person you want your daughter to marry’.

The talented athlete showed that despite missing the AFL academy, you certainly will come under the eye of scouts right across the country and he is another success story for those who have missed the academy programs.

A steller season has seen McGrath jump from a relatively unknown to a player some see as the most likely to go number one in November’s AFL draft.

Why hasn’t anyone compared him with a defensively minded GAJ yet! - the way he gets the hard ball, dishes off with a neat handball, gets into space to receive then kicks to advantage… or would I just be selling him short :lol:

Let’s hope mc luggage wants to come home in a couple of years.

Let’s hope mc luggage wants to come home in a couple of years.

Suns had pick 4 from their own poor on field performance. (Ainsworth)

6 from Tigers for losing Prestia. (Scrimshaw)

8 from trading their 2015 first rounder to Melbourne and getting Dees 2016 back. (Brodie)

10 from Hawks for losing O’Meara (Bowes) 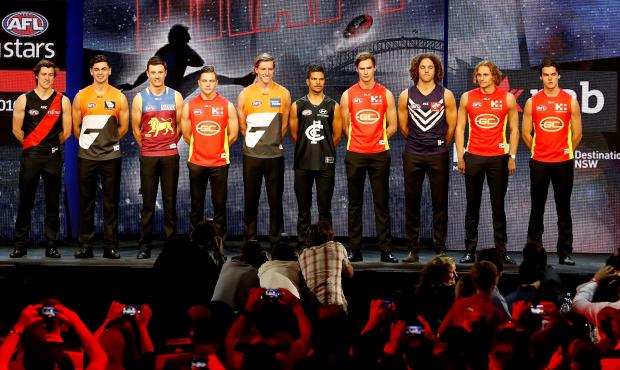 Setterfield however is going to be a beast.

Remember how much talk there used to be in the media about compromised drafts, which were meant to end a few years back, but still 6/10 from GC & GWS? AFL you are such a f’in joke

We always play sides that have a player we can’t ever seem to lay a hand on to tackle.

Now we have our own. Will create so much play with his line breaking ability & sideways zigzagging to get out of trouble.

The Wanganeen movement comparisons are spot on.

Pumped to have McGrath & Colyer in midfield, and Raz & TIPPA at half forward, all in same side next year. And maybe even the Green machine too.

We will be so exciting to watch.

THE MORE I WATCH THE MORE I SEE A BABY GAJ, SORRY CLUGG IM IN LOVE!!

Setterfield however is going to be a beast.

Four suns in that photos all thinking ‘freak this’

He can compare notes with McClug, what a ■■■■■ sandwich that kid is going to walk into, hopefully we are working on the exit strategy for him already !!!

I still think our list lacks pace, and we only partially addressed it today with the McGrath selection...so for that reason at least, he was a very important selection.

IIRC, that makes Jay Neagle faster than both of them!

It would be literally a half step more stupid than me emailing him asking him to play a WA boy at Subi cos he's my favourite player and I wanna see him live.

Have you stopped doing that now?

I still think our list lacks pace, and we only partially addressed it today with the McGrath selection...so for that reason at least, he was a very important selection.

IIRC, that makes Jay Neagle faster than both of them!