Although we had that growing up, it wasn’t Gould League, or Cayley’s WBIT.

Never got into the nature photography thing, not sure why

Because the required glassware is expensive!

That’s a fantastic list. I can conjure the image of most of them in my mind, except the ducks. I think I’m duck-ist because they all look the same to me!

I don’t actively “birdwatch”, but learnt about them in school, and in a time when there were no pokemons, observing all the different species was something of an obsession for a while. I have never got into the photography side though, and to be honest, I don’t understand why just seeing them doesn’t count!

Anyway, seems there’s quite a bit of scope to add to that list, off the top of my head you should be able to add a bunch of birds of prey “fairly easily” (ie, if you’re lucky). (eg Nankeen Kestrel, Peregrine Falcon, Little Eagle, Brown Goshawk, Wedge Tail etc)

I don’t have saladin’s photography skills, but here are some rare black cockatoos, in my garden in Perth: Once again, not the best picture quality (taken from an older, even shittier phone), but still among the highlights of my photo collection. You’re lucky to be alive

I was actually in the car at the time. That guy was just foraging along the side of the road. No way am I getting that close to a Cassowary on foot!

However, of all the birds in the world, these might be my absolute favourites… These are great dusky swifts at Iguassu Falls. They can actually pick out gaps in the seemingly solid curtain of water to fly through so that they can reach the rocks behind the falls where they perch. Watching them dart in and out is just an amazing display of perception and coordination.

That those that ever get that far, l can recommend Dal Lake, in Srinigar, Kashmir. Staying on a houseboat on the lake l got to see plenty of birds, including 3 different varieties of Kingfishers (including the famous blue backed type, the Derwent pencil was named after).

I loved watching the athletic swallows skim just over the water at speed. They would drop their lower beak into the water for 4 - 5 metres, to take a quick drink on the wing.

By far the most entertaining birds to watc, were the antics of the eagles. They would land on the electric power lines and then attempt without any success to hang on. they simply couldn’t grasp the power lines as their talons were too big. They would flap their wings for 5 minutes or so trying to get their balance, before giving up and flying off. They would then return about 10 minutes later and go through the entire process once more, without success. They never learned. Meanwhile the other birds sitting peacefully on the lines would look at the eagles in disbelief that a bird so mighty, could not accomplish this simplest of tasks.

In Nepal keep a look out for the Himalayan vultures soaring on the thermals. These birds are huge, and the biggest of them have a wingspan of around 3 metres.

Here’s my contribution , Eastern Whipbird , Olinda State Forest, Always hear them but harder to see, even harder to photograph ! Was pretty chuffed when I got this one Just showed this to my BH and she is purple with envy. Looks like we’re heading back to the Dandenongs.

Birders are generally kind-hearted but they are also pragmatic. My BH is a perfectionist and loses sleep over photographs she posts that she considers dodgy. Such was the case with her Thornbill pic. So when this little thing knocked itself senseless against our living room window this morning she stood sentry over the stunned bird to prevent it being killed by the noisy miners that rule our area, but she also took her camera and got a close up pic to upload before the little tacker came to its senses and bugggered off.
PS The flitty flitty birds are much easier to spot than to photograph so close ups like this are rare. Well, I guess I’m technically a “blitz bird”, but here are some feathered ones:
I took this a few years ago at the Ballarat Wildlife Park. This one’s from the Melbourne Zoo, pre lockdown this year. Not sure what this is, some sort of tropical South American parrot I’m assuming. I couldn’t get one with its wings open, but what a beautiful creature. A rare picture of the elusive GRR’s Better Half. 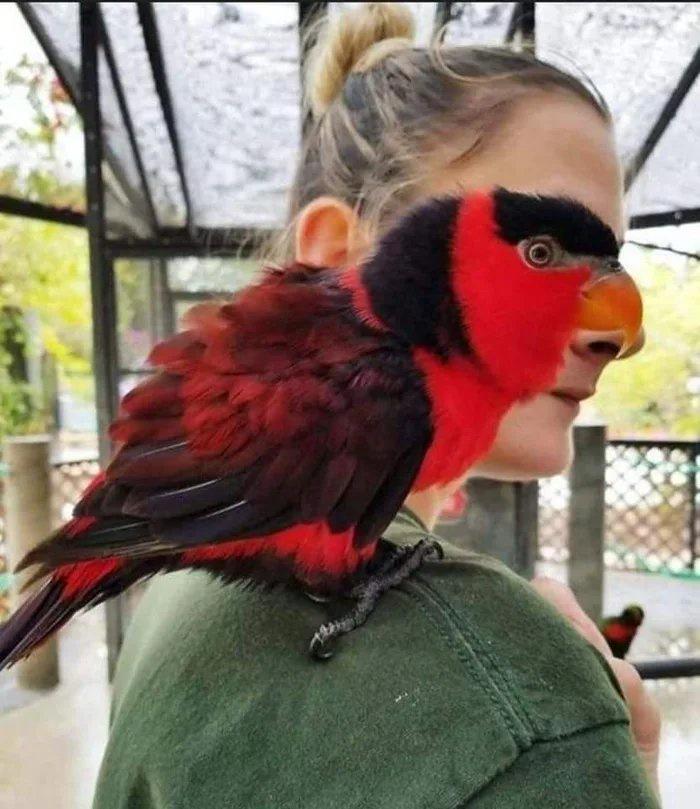 They mate, can you tell me the name of that website. Sounds like a cool thing to do.

Did you have wedgies yet? Was coming past the liptrap turnoff near Walkerville a couple weeks back and had two pairs (four birds) slowly cruising 40 feet above the road, most I’ve seen at once at that range. And saw a sea eagle at Port Franklin… or a white eagle anyway. Seemed too big to be a little eagle.